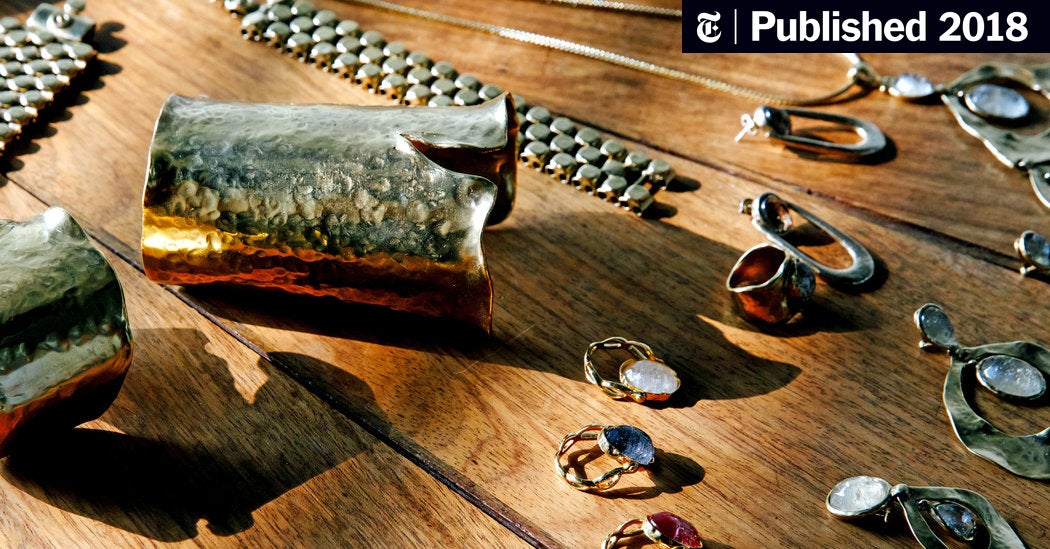 PARIS – French jeweler Robert Goossens, who died in 2016, is hardly a household name; his clientele, however, included some of the most renowned designers of the last century, including Coco Chanel, Yves Saint Laurent and Cristóbal Balenciaga.

For the moment, however, the profile of Goossens Paris, the brand he founded in 1950, is expanding, as part of a strategy led by Mr. Goossens’ son, Patrick, its artistic director, and Chanel. , who bought the company in 2005.

“We had this idea a few years ago which we developed very slowly with Patrick, to give more visibility to the brand,” said Bruno Pavlovsky, president of fashion at Chanel. “We decided to treat Goossens like a start-up and relaunch the story, by being able to capitalize on DNA.

Last year, Barneys New York began carrying a selection of items from the collection; it has been part of the Bon Marché Rive Gauche jewelry assortment since February 2016. At the end of 2015, an elegant Goossens Paris boutique opened on rue Saint-Honoré, filled with jewelry as well as the brand’s tableware, such as a dish curved thick glass nestled on a richly crafted metal base priced at just under $ 1,000. Furniture, from small objects to large chandeliers and tables, has always been part of the brand’s assortment.

Goossens Paris is part of Chanel’s Métiers d’Art acquisitions group, made up of specialist heritage brands such as Lesage, the embroidery house founded in 1924, and Maison Michel, which has been making hats since the 1930s. Its look has essentially remained the same since its inception: The pieces are earthy, tactile and daring, typically combining metal with semi-precious and fancy stones.

One popular style, an extra-large cuff based on a style owned by Ms. Chanel, epitomizes the aesthetic. It is encrusted with spectacular stones of deeply pigmented rock crystal and garnet cross; it makes a statement but is casual enough to wear with sportswear on a Sunday afternoon. The bracelet on which the stones rest is in brass covered with 24 karat gold, a mixture of metals that prevails in the collection; at $ 1,500, it costs less than you might expect given its size, materials and craftsmanship.

Other pieces are similarly designed and priced, like a large flower-shaped ring with baroque pearls and garnet that costs just over $ 500, and a stacked chain necklace that costs around $ 600.

“It’s still Goossens but we’ve kind of rejuvenated it,” said Patrick Goossens, 60, in an interview in a sunny conference room at the brand’s headquarters in Pantin, on the outskirts of Paris. The sturdy heart-shaped table he sat at was built by his father as a prototype of a larger version, made in ebony, for Mr. Saint Laurent. “We kept Goossens’ DNA but at the same time, it is in tune with the times. It’s multigenerational.

“Today, if I give a piece of jewelry to a friend of my age,” he added, “her daughter will take the jewelry and not return it.”

Many of the current pieces are updated versions of archival material designed decades ago by Mr. Goossens’ father. “I’m sort of focusing on different things,” Mr. Goossens said. “Sometimes there was only one brooch, and from that brooch I would make a ring, a necklace, a bracelet; another time there would be 10 brooches, 10 necklaces, 3 earrings and no rings, so I would do different things.

Mr. Goossens, who joined the company in the mid-1970s after training as a fine jewelry craftsman, said he was inspired on a daily basis by the way the young women who worked in the brand’s workshop wore her jewelry.

“Not all customers know the story,” said Mony Deswelle, buyer of women’s accessories at Bon Marché Rive Gauche. “Some people know the brand, but there are also younger clients who just like the look, and they don’t necessarily know who Robert Goossens was and what he did for all these fashion designers.”

Patrick Goossens and his older sister Martine, who oversees the brand’s bespoke furniture and lighting, are the fifth generation in the family to work with metal design; their lineage includes an ancestor who helped build one of the Statue of Liberty’s hands.

Robert Goossens began his career at the end of the 1940s, working in a workshop in the Marais district of Paris, where there were at the time many jewelry workshops, making pieces for designer houses. Her bohemian circle of friends included Ms. Chanel and Mr. Balenciaga. (“Everyone kind of knew everyone,” said Patrick Goossens.)

At the time, Ms Chanel ordered personal items containing a mixture of gems and fancy stones, including gems which Patrick Goossens said were gifts from some of Ms Chanel’s ex-boyfriends. This work began not only with Mr. Goossens’ brand, but a professional relationship with Ms. Chanel which lasted until her death in 1971.

Goossens Paris includes, as it always has, three components: branded jewelry, large costume pieces that are discreetly made for other brands and furniture that is now well placed in several Chanel boutiques, ordered by architect Peter Marino, a longtime fan who is responsible for the design of the fashion house’s stores around the world.

When Chanel bought Goossens Paris, some of the jewelry house’s business clients feared their working relationship might end. “They asked me if I was still allowed to work with them, and I replied: ‘Not only do I have the right, but it is a duty that I have to work with you'”, remembers Patrick. Goossens. Nevertheless, the company has gradually put the priority on its own branded items, which now represent around 80% of its jewelry business.

As for the pieces it designs and produces today for other brands, the company does not comment, but it is difficult not to spot the pieces labeled “Marc Jacobs” and “Céline” in the workshops of the Goossens Paris office.

As brand awareness continues to expand, opening a Goossens Paris store in the United States is part of the long-term plan, according to Chanel’s Pavlovsky.

“We have two priorities: Paris and New York,” he said. “We are very happy to start with Paris. The store is doing better and better. Someday we’ll do the same in New York.