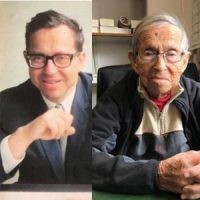 Paul Fisher, an estate jewelry and natural pearl merchant who achieved legendary status in the industry, died Dec. 4 of complications from pneumonia. He was 92 years old.

Fisher worked in the industry for 74 years and deeply loved the gemstone and jewelry business, says daughter Marianne Fisher JCK. Although he has become physically fragile in recent years, he still came to the office almost every day until he was hospitalized last week.

Fisher comes from a long line of gemstone and jewelry professionals. The family business, which became Paul Fisher Inc. in the 1950s, was founded in the 1850s in Vienna by Julius Fisher, a specialist in natural pearls used as buttons in the fashion industry.

In 1921, Julius’ grandsons, Ferdinand and Robert (Paul’s father), founded the Bruder Fisher company in Vienna. The advent of cultured pearls in the 1920s had a dampening effect on the price of natural pearls (which at one point could be more valuable than diamonds), and Robert Fisher also began selling estate jewelry. He brought the family business to London in 1938 and opened an office in New York in 1941.

Paul made his debut with Paul Fisher Inc. in New York in 1956 and established the London branch of the company in 1980. He was born in Austria and spent much of his career in London, although he Traveled extensively in Europe and the United States for decades, cultivating brand representation in Paris and Hong Kong, among other major cities.

In New York City, Paul Fisher Inc. was one of several gem and jewelry dealers who had an office at 608 5th Ave. The company was based in the Manhattan building for about 50 years before its owners evicted the entire storey of gems and jewelry. companies, and Paul Fisher Inc. moved to 10 Rockefeller Center.

Marianne Fisher, director of Paul Fisher Inc. and the youngest of Paul’s six children, explains that the reason the company was so successful was Paul’s affinity for travel. “He was constantly traveling, between Switzerland and London and New York and Chicago and everywhere else,” she says.

Fisher was a skier in his youth, and in the last decades of his life he was an avid reader of history books, in particular.

But he is perhaps best known for his mentorship of young professionals. Paul mentored 40 apprentices throughout his career, many of whom went on to illustrious careers, in intensive six-month periods.

“He trained them and taught them all aspects of the business, and he did it with his heart,” says Marianne. Several of his former apprentices threw an appreciation party with their mentor in Basel, Switzerland in the 1990s, and these same people have flooded the Fisher family’s inboxes with notes of sympathy and fond memories since the Fisher died on Wednesday. “There is a great group of people who know him for his mentorship. He has always been a very generous person and has selflessly helped so many people.

She adds that her father had a golden rule: “If you sell, [the figures] down, and if you buy round up, don’t be mean or cheap. She notes, “It was never all about the money, it was more about keeping people happy, and he loved the business. He really thrived on it.

(All images courtesy of the Fisher family)